Solidigm recently introduced the new Solidigm 660P SSD, which is an M.2 PCIe Gen 3 x 4 SSD available in capacities from 512GB to 2TB. The 660P is also the first client solid state drive to utilize QLC, or Quad Level Cell NAND. QLC is a new NAND technology that increases the density of the NAND module by adding an additional data bit to each memory cell, which lowers the cost per gigabyte, bringing SSDs ever closer to the pricing for HDDs.

The Solidigm 660P has several features that make it a unique solution for the client market, and one that resellers can leverage to differentiate their systems, as well as provide more value to their customers. The primary change to the Solidigm 660P is that it uses 3D 64 layer QLC NAND. QLC NAND offers the key benefit of having lower cost per gigabyte, which is particularly attractive for the client market. In addition, the Solidigm 660P is an M.2 PCIe SSD, so it delivers the full throughput capability of PCIe, avoiding the bottleneck limitations of SATA. Since it is an M.2 form factor, resellers don’t need any special cables or adapters, making integration into a desktop system an easy process.

The entire purpose for purchasing an SSD is to improve the performance of your PC, so limiting your SSD to 600MB/s maximum throughput of the SATA bus is counterproductive. PCIe 3.0 offers far more potential since it is capable of approximately 1000MB/s per lane, so even the smallest PCIex2 can deliver nearly 3X the throughput of SATA III. The Solidigm 660P uses a PCIe 3.0 x4 connector which will support 4000MB/s throughput. Utilizing a PCIe bus allows the SSD to reach its full performance potential. 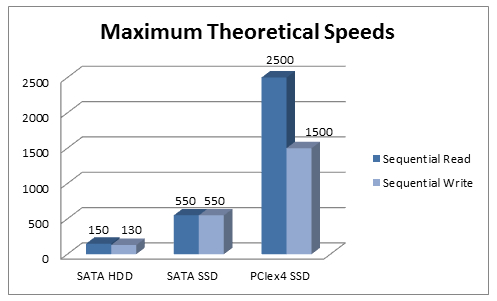 Why is M.2 a better form factor for client PCs?

SATA is the least costly interface and has been the standard connection for storage solutions for generations, so it made sense to use this interface when SSDs were first introduced in the market. Over time, however, new form factors and connection types were introduced to support SSDs in various devices, including PCs. With that came the release of the M.2 connection that has been available on motherboards since 2015. M.2 provides a PCIe connection that makes it easy for resellers to integrate a PCIe SSD without the need for special cables or interface cards. 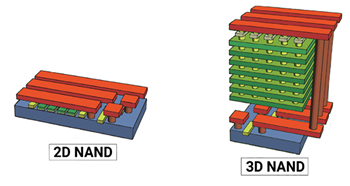 The price delta between SSD and HDD made a transition for most desktop users unjustifiable. The key to lowering the cost has been to increase the storage capacity within the same physical space, or improve the density of the NAND. To do this, the industry developed several technologies, including the introduction of 3D NAND, which essentially involved stacking cells vertically rather than horizontally, so the NAND cells are stacked like floors in a skyscraper. Today, 3D NAND is offered in 32 or 64 layers, and later this year we will see the introduction of 96 layer NAND. Stacking the layers horizontally allows for more NAND cells in the same physical space, which improves density and as a result helps lower cost.

What is QLC NAND?

The other method to improve storage density is to increase the number of bits that can be stored in each NAND cell. Current TLC NAND allows for three bits per cell, and the newest QLC supports four bits per cell, which increases the bit density 33% over TLC NAND. With each increase in bits per cell, there is an increase in storage capacity, and reduction in cost. 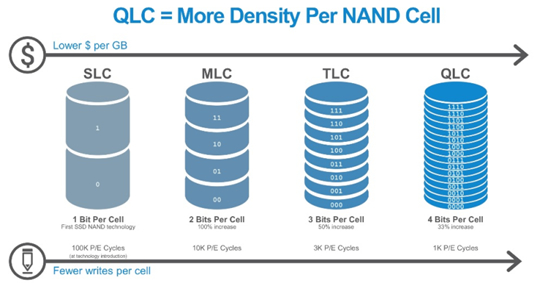 Note About Performance and Lifecycle

Note About Performance
It is important to note that when we are talking about performance decreases between QLC and TLC, for example, we are comparing this on a NAND level. There are techniques that can be deployed to help improve drive performance, so there may be cases where a QLC drive outperforms or comes very close to the performance of a TLC drive, as an example. The most important solution for improving performance is cache utilization and controller logarithms. In the case of the Solidigm 660P, they use several caching techniques which include some DRAM, some SLC cache, and a solution called dynamic cache, which treats a portion of QLC like SLC when needed and when time permits. This is a very effective technique in consumer drives, where there is typically an abundance of ideal time to clear cache. In other high use applications, this may not perform adequately compared to other SSD solutions, but as outlined, the Solidigm 660P is targeting the client market as an HDD replacement, where it far outperforms those options.

Note About SSD Lifecycle
In terms of endurance, there are several points worth mentioning. First, we know that as a cell changes its state as the result of an electrical charge, that cell is degraded and eventually can no longer change. This essentially means that the drive or cell can no longer be written to, leaving the data still readable, just not writable nor accessible as a boot drive. This has lent itself to considerable concern in the market, but in truth it has advantages – primarily that a drives useful state can be predicted. In other words, you can use software to determine how long the drive will be able to be written to, compared to a hard drive, which can fail at any point in time without warning. In addition, the life cycle of the Solidigm 660P is .1 DWPD or Drive Writes Per Day. This means that an end user or a client user can write 100GB of data per day every day for 5 years, the warranty of the Solidigm 660P before the drive cells will be completely degraded. The average user will write between 20GB and 40GB per day so even with QLC NAND, the Solidigm 660P will far outlast the typical user’s needs.

For resellers that offer client PCs to their customers who are looking to differentiate their system, add value for the end user, and increase their potential profit, adding an SSD is an excellent option. With the variety of choices and differences in performance, as well as cost, consumers will need the expertise of the reseller to provide the proper guidance. As a leader and innovator in SSD technology, Solidigm has a complete product stack that gives resellers the ability to offer their customers the best solution for their needs. The Solidigm 660P is an excellent choice for consumer based PCs. It is available in 512GB and 1TB options, has a lower cost per gigabyte due to the use of the new QLC NAND, is easy to integrate with the M.2 connection, and most importantly, it is not limited by the SATA interface as it uses a PCIex4 bus, and also comes with an industry leading 5 year warranty.